Voice of the Publics

Dr Hanna Hagmark- Cooper will talk about her work as the Director of the EMYA nominated Aland Maritime Museum as well as ‘Facebook as a way of collecting materials for museum exhibitions’. 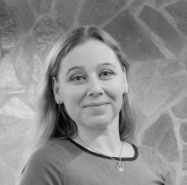 In April 2012 four men, all of whom had worked for the Gustaf Erikson (GE) shipping company, met up to plan and organise a summer get-together for former GE employees. As they exchanged memories and photos, they discovered an emotional need to collect stories and pictures from their past working lives (the 1950s onward). The men formed a Facebook group: ‘We who have been to sea in GE ships’. It proved to be immediately popular. Today the group has more than 550 members and still growing. In doing so, fulfilling a social necessity to re-member.

Alex our patient (he had to be) iMotion camera operator and genius of an editor.

Over the last few months, I’ve been part of a team at Royal Holloway, University of London putting together a Massive Open On-line Course (MOOC). The idea is to provide an accessible course introducing the history and public history of Magna Carta. Further details can be found here: Magna Carta 1215-2015. Also see Emm Barnes Johnstone’s blog entry, A Magna Carta MOOC, on the US Library of Congress’s  site (Emm is a contributor and coordinator on the course as well as being colleague with the Centre for Public History, Heritage and Engagement with the Past).

MOOCs are relatively new developments, only appearing in any numbers since 2012. Often free to all, as ours is, the idea is to offer unlimited participation and open access to education. MOOCs tend to be treated by some fellow academics either as the greatest educational development to ever happen, or by others as an unmitigated disaster that will fatally undermine higher education. So far, I doubt either charge will stick.

They are however, much harder to do than might be thought and involve a great deal of work. Unprepared colleagues, and I’ve been guilty here, can take several hours to record a few minutes on film. Preparation is important. Nor should we think that a MOOC is a television programme rather it is more akin to the Open University packages of old, but in digital, e-learning, form.

I have also had to learn to tailor my teaching style (normally an explosion in a paint factory) and try to adopt a more measured approach. In the process, I’m using a lot of slides and it’ll be interesting to see if this works. Given the range of styles that members of the team are adopting, it is likely that we will be able to collect some useful data on what works and what doesn’t. I hope to be able to report on some of this as we go along.

So far, there have been several other valuable lessons. Having a good production team for the videos, which are at the core of our MOOC, is essential. iMotion have been terrific. Taking the most awful presenting performances by me for my sections and turning them into rather lovely short films.

Another is to have key coordinators and the work of Steven Franklin and Emm Johnstone have been crucial, alongside the long–suffering Caroline Tutty at the University of London.

As well as thinking about how participants will respond to the different teaching styles, I’m interested in seeing how they might engage in the key debates. In using JC Holt’s proposal that the reception of Magna Carta over the ages is the history of an argument, I hope that those taking the course will be able to add their voices to the discussion that will mark the anniversary of the sealing of Magna Carta in 2015.

I’m aware that the award also represents a collective effort, built on cooperation between staff and students at RHUL to oppose fees, cuts and redundancies and to promote an alternative vision of Higher Education.

Fantastic ESSHC meeting of the Oral History and Life Stories Network. ESSHC2016 will be in Valencia. Our Network will be chaired by Andrea Strutz (Austria), Anne Heimo (Finland) and Graham Smith. Timothy Ashplant, who made a major contribution to the ESSHC2014 meeting in Vienna, has decided to take a break from organising, but will continue to help out. We are aiming to have a draft call for papers out in time for this year’s International Oral History Association.

Spent today taking a few photographs to illustrate a chapter on the public history of Magna Carta for OUP’s forthcoming Public History Handbook. The edited collection has   dragged on for too long and I hope that the book might appear before 2065…

Freedom under whose law? 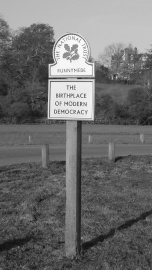 A very small sign… for a rather large claim…

Memories of Books in our Life Experience

Dr Graham Smith of Royal Holloway’s Department of History has been awarded an AHRC grant to look at how the experience of reading shapes our recollections in our everyday lives.  The research will be in collaboration with Dr Shelley Trower of Roehampton University and the combined grant is nearly £300,000.

The project, ‘Memories of Fiction: An Oral History of Readers’ Life Stories’ will explore what parts of fictional material are remembered and why, as well as how memories of fiction might shape the way we remember and narrate our lives.

“Oral history’s resurgence in the twentieth century began with a radical idea: that oral history is a means by which the voices of those who have been traditionally hidden from history will be heard. We have since then an increasingly sophisticated understanding of the processes of remembering and forgetting. These insights into subjectivity, memory and narrative have also been matched by a growth in the collection and archiving of oral testimonies,“  Dr Smith.

In this project, researchers will compare the experience of individual readers and those from reading groups, and will also consider how we associate memories of books with our life experiences and emotions.  Scholars of book history and literacy will gather information from written archives and from oral materials which have recorded information about reading texts.  The project will challenge the assumption that reading is merely a private, solitary experience, and provide an insight into how communicating what we read can shape our understandings of others and ourselves.